Last month I wrote a blog about Common Majority Ownership (you can read it here) where I discussed how separate legal entities are tied together by the WCIRB when the same individual owns a majority of each of those entities. 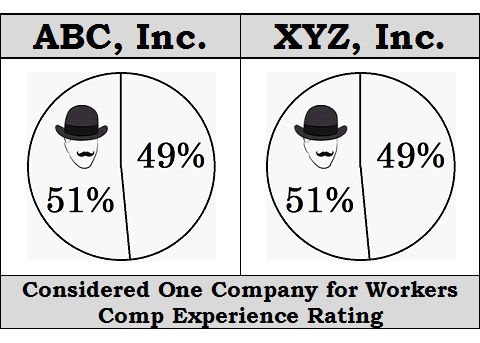 As you can see, since the guy with the derby owns more than 50% of each company, the WCIRB will treat both companies as one.

The net result is that both ABC & XYZ will share an Experience Modification (Xmod).  Oh, and there’s another thing: No insurance company will insure one entity without the other(s).  This is a sometimes unintended consequence that can wreak havoc on a business trying to operate on a budget.  Why?  Because not being able to insure one without the other makes it hard to find insurance, and “hard to find insurance” means hard to find quality insurance companies with competitive rates.

These two facts (same Xmod & hard to get insurance) may cause someone who owns multiple entities to redistribute shares so that he or she is not the majority owner in all of them.

This is what I want to clarify with this post.  Before you sell your stock, know this: the WCIRB looks at the group of owners that make up the majority, not just individuals, in order to determine Common Majority Ownership.

For example, if the guy in the derby hat above owns 51% of both ABC and XYZ and his wife owns the remaining 49% of each, and he thinks that giving his wife an additional 2% in XYZ (making her the majority owner in XYZ) will relieve him of the common majority rule, he is mistaken.  Why? Because the WCIRB looks at the collective: the same two people own a majority of both companies.

Here’s how it looks:

This rule applies to any number of people.  If the same 3, 4, or 5, etc., people together make a majority of ownership of multiple entities, they will all be tied together.

Be in the know and avoid insurance surprises!